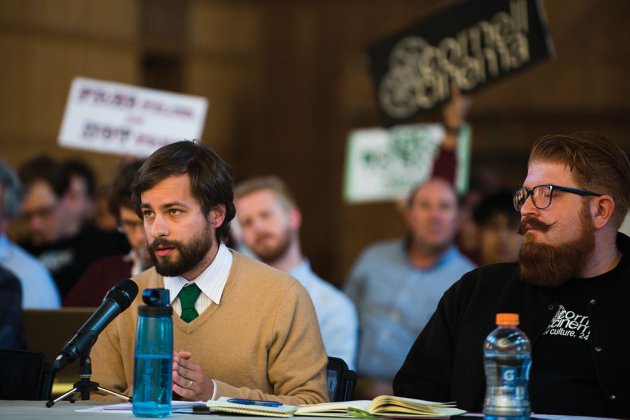 Several passionate Cinema supporters held signs in support of increasing cinema funding and spoke to the S.A. about the importance of preserving culture and arts on campus at the meeting.

Debating with members of the Appropriations Committee, Douglas McLaren ’05, manager of Cornell Cinema, explained how his experiences at Cornell Cinema as an undergraduate inspired him to pursue a master’s degree in film preservation.

“I found my experience at Cornell Cinema to be touching to such an extent that I changed my path entirely,” McLaren said.

Speaking to The Sun, McLaren added that in the 10 years since he has been involved with Cornell Cinema, screenings have decreased in frequency and financial support from University administration has been weakening.

Members of the Appropriations Committee argued that strategic funding cuts must be made to allow for newer organizations to receive funding and that internally restructuring the cinema’s operations would alleviate some of the cinema’s financial problems without requiring increased S.A. funding.However, McLaren said that a decrease in funding from the College of Arts and Sciences after the college restructured its budget has already put more pressure on Cornell Cinema.

“We’re trying everything that we can to bump up revenue,” McLaren said. “A healthy line item is our film rental and our filmmaker events and at some point we’ll have to cut those down. Our overhead [costs are] pretty high, and our discretionary spending is on the screenings and the events, so there’s not a lot of wiggle room.”

McLaren explained that the cinema compromised with Dean of Students Kent Hubbell ’69 to prevent the cinema’s property rental costs from rising, but because student organizations are now permitted to use the cinema’s facilities on some weekends, Cornell Cinema is often unable to screen films on its most lucrative days.

“I’m hopeful that we will see some increase in support from the graduate students,” McLaren said. “They, like the S.A., have indicated that they do value Cornell Cinema and I think that is very heartening to hear.”

McLaren said that because the cinema continues to lose money every year, further financial support from the S.A. would help alleviate pressure as the cinema negotiates with the University administration.

According to McLaren, if Cornell Cinema cannot secure financial support from the GPSA or the University administration, the Cinema will need to rely on donations from alumni and further S.A. funding.

“We will definitely have to increase our alumni relations and go back to the S.A., and I know that’s the last thing they want to hear. If everyone else is shutting the door on us, it’s [the S.A.] or bust,” McLaren said. “I am very hopeful that with this new administration we can try to work something out.”