FREE PREVIEW SCREENING OF “THE KITCHEN” - sold out 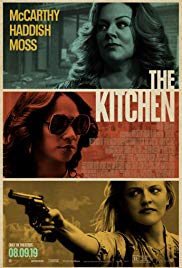 Set in Hell’s Kitchen in the 1970s, “The Kitchen” is about how the wives of New York gangsters continue to operate their husbands’ rackets after they are locked up in prison.  The film opens Aug. 9.

Director/screenwriter Andrea Berloff ‘95 earned an Academy Award nomination for Best Original Screenplay, as well as nominations for a Critics’ Choice Award, BET Award, NAACP Image Award, and a WGA Award, as well as various other regional critics’ awards.  She wrote her first screenplay, “World Trade Center,” for Oliver Stone in 2006.  Her other credits include “Sleepless” and “Blood Father.”

Parking:  free on the lot - details will be provided

RSVP: Sign up below for your seat(s) THIS IS A MEMBERS-ONLY (PLUS 1 GUEST) EVENT - SOLD OUT

More details about the film

Now they run the neighborhood.

The gritty, female-driven mob drama “The Kitchen,” from New Line Cinema and BRON Creative, is written and directed by Andrea Berloff, who was nominated for an Oscar for Original Screenplay for “Straight Outta Compton.”

New Line Cinema presents, in Association with BRON Creative, a Michael De Luca Production, “The Kitchen.”   Set for release on August 9, 2019, it will be distributed worldwide by Warner Bros. Pictures.  Rated R for violence, language throughout and some sexual content.