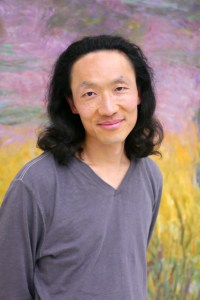 Cornellians will quickly recognize that Athena is Ithaca, Elkwood is Moosewood, and Lenrock is Cornell.  A fraternity also plays a part in this little campus mystery.

Korean-American adoptee Siobhan O’Brien has spent much of her life explaining her name and her family to strangers, but a more pressing problem is whether to carry on the PI agency that her dead boss unexpectedly left to her. Easing into middle age, Siobhan would generally rather have a glazed donut than a romance, but when an old friend asks Siobhan to find her daughter who has disappeared from her dorm, the rookie private detective’s search begins at Llewellyn College.
A women’s institution of higher learning in upstate New York, Llewellyn, for the first time in its two-hundred-year history, has opened its doors to male students.  Fringe group The Womyn of Llewellyn are furious, but their ex-fashion-model president declares they have little choice due to financial shortfalls.  But if that’s true, where did she get the money to build a brand new science center, and why is it under 24/7 surveillance by the town cops?
As Siobhan delves deeper into the search for her friend’s daughter, she encounters politely dangerous men in white turtlenecks, vegan cooking that might kill her, possibly deadly yoga poses, and a woman named Cleopatra who’s got more issues than National Geographic. This first in a new series introduces an endearing P.I. heroine in the tradition of classic female detectives like Sue Grafton’s Kinsey Millhone and Sara Paretsky’s V.I. Warshawski readers won’t be able to put down.
- - - - - - - - - - - - - - -
Sung J. Woo’s short stories and essays have appeared in The New York Times, PEN/Guernica, and Vox. He has written three novels, Skin Deep (2020), Love Love (2015) and Everything Asian (2009), which won the 2010 Asian Pacific American Librarians Association Literature Award.  A graduate of Cornell University with an MFA from New York University, he lives in Washington, New Jersey.  Check out Woo's website: http://www.sungjwoo.com/