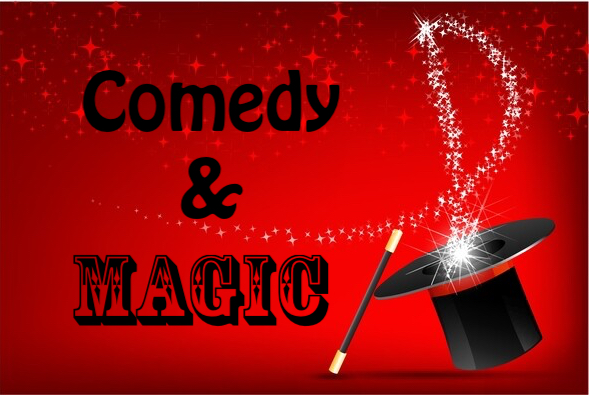 This year we are celebrating Zinck’s Night with an amazing event featuring two talented magicians from the Magic Castle, a hysterically funny engineer-turned-comedian and an amazing freestyle rapper/and comedian. This event promises not to disappoint! Register before it fills up. This is a clean show - all ages welcome.

Nathan Gibson, MAGICIAN - Winner of over 20 first place awards from the magic fraternity, Nathan is known as the “Entertainer for Entertainers” and his clients include Johnny Depp, Rod Stewart, Steve Martin, Craig Ferguson, Jay Leno, Paris Hilton and Justin Timberlake. He has been featured on most major TV networks. In 2006, Nathan received from the Magic Castle the Achievement Award, one of the highest honors bestowed by the famous Hollywood club.

Don McMillan, COMEDIAN - Don graduated Lehigh University with a B.S. in Electrical Engineering and Stanford University with a Master’s Degree in Electrical Engineering. He worked for AT&T Bell Laboratories (as part of the team that designed the world’s first 32-bit Microprocessor) and then as a computer chip designer at VLSI Technology, where he designed more than 20 Standard and ASIC Designs (many of which are still out there today). After winning the 16th Annual San Francisco International Stand-Up Comedy Competition in 1991, Don turned in his chips for a microphone. He went on to be $100,000 Grand Champion on Star Search in 1993. He’s had numerous television appearances including The Tonight Show, The Larry King Show, MTV’s Half Hour Comedy Hour, and A&E’s Evening at the Improv. Nowadays, you can catch Don headlining top comedy clubs across the country including the Improv, Comedy and Magic Club and Ice House.

Tam Vo, MAGICIAN - Tam's interest in magic began when he was in his late teens. What started out as a hobby, then transpired into a passion, and is now a career. Tam is a regular performer at the World-Famous Magic Castle in Hollywood, California.

Chris Turner, FREESTYLE RAPPER/COMEDIAN - Chris’s quotable gags and rapid freestyle raps have established him as one of the most in-demand acts on the corporate circuit, and at comedy clubs around the world. He is based in Los Angeles where he regularly performs at the world-famous Comedy and Magic Club. His keen wit and intelligent wordplay have seen him rack up over 12 million views on YouTube. He is a founding member of Racing Minds, one of the UK's most respected improv troupes, with 7 sell-out runs at the Edinburgh Fringe performing Aaaand Now for Something Completely Improvised, a 12-part series recorded for Audible, and 600,000+ Soundcloud subscribers to their 50s-style radio comedy The Wireless Podcast.

Location: Your laptop, your living room, your sofa!

Details: This is a clean show - all ages welcome!

Click here to reserve your spots and buy tickets!!!