“Echoes of the Empire: Beyond Genghis Khan” 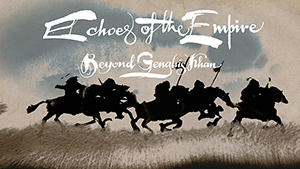 I have a new film -- “Echoes of the Empire: Beyond Genghis Khan” -- that's going to have a sneak preview prior to its international release.

Tired of being stuck at home? Sick of politics? Then let me take you on a spellbinding journey to Mongolia.

The sneak preview of this movie will run for a week starting October 16th, 2020 available for streaming. Then join a Zoom Q&A with the film's creative team on October 21st.

The trailer and tickets for the online screenings are now available at: https://cinemapolis.org/film/echoes-of-the-empire-beyond-genghis-khan/

Proceeds from this screening will support Cinemapolis and PhotoSynthesis, two long-standing arts organizations.

Our previous films have been New York Times Critics' Picks and we feel this new one will surpass even those hits. We hope you'll watch, and please share this email with friends.