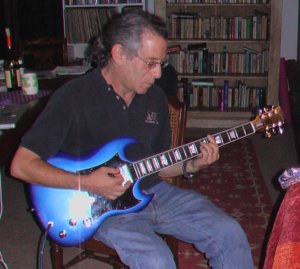 His father, owner of a dry cleaning supply business and his mother, an administrator at Queens College, wanted their son to be a lawyer.

Instead, Michael emerged, in 1974, from Cornell’s ILR School, a film editor. He would go on to work with Martin Scorsese, the Coen brothers, and, the aforementioned, Mr. Allen. So what happened?

Over lunch at the Mustard Seed in Los Feliz, Michael filled me in.

The roots of his ultimate trajectory can be traced to his New York City childhood in the 1960’s and 1970’s in the midst of a massive arthouse scene.  He could hop on the E train and 20 minutes later be in Manhattan.  At The Thalia, The New Yorker, Bleecker Street Cinema, The Elgin, he’d sample anything from “Italian neo-realism to great old Westerns.”  When he couldn’t go out, there were always black and white classics on late night TV. He fell in love with film.

Michael humorously alludes to other factors that might have shaped him. Harvey Weinstein attended Michael’s high school. Fran Drescher and Ellen Barkin went to his elementary school. (He played Little League with Ellen’s brother, George.) Gary Levin, network executive, Simon and Garfunkel and The Ramones all lived nearby. “There must have been something in the water.”

At the same time, mom and pop movie theaters were having a hard time making ends meet. Some of them offered alternative programming; Michael saw a Buñuel film at a neighborhood cinema in Queens.  Perhaps, Michael surmises, the Weinsteins, with similar local influences, grew up thinking that arthouse cinema was the norm!

When Michael arrived at Cornell, there was no Film Department. There was only one professor, Don Frederickson, who even taught film.  While Michael was supposed to be studying labor law, he took Frederickson’s Film History class. He also regularly viewed movies at Cornell Cinema, which, he astutely realized, was like a “continuation of the New York movie-going experience.” He fell for film even more deeply.

Between his junior and senior years of college, Frederickson arranged, through a Cornell alumnus, an internship for Michael, at a commercial production and editing house.  There, Michael met editor, Paul Hirsch, whom Michael states, was a “very generous teacher.” If Michael completed an errand more quickly than expected, he would use the extra time to stand behind Paul and watch and listen. Michael passionately absorbed it all.  At around that time, Hirsch began to work for Brian de Palma and, then for George Lucas on “Star Wars.”

After graduation, Michael was asked back. He couldn’t have been more thrilled.  His parents, however, particularly his father, were skeptical.  Why was their son, with the Ivy League education, running crank cans across town for a living?

It’s not as if Michael lacked a pragmatic side. He dreamt originally of following the path of the French New Wave artists, “who wrote beautifully about film and also made beautiful films --unlike today where there is such a big division between criticism and film-making.”  This was never meant to be.  Although, he has started blogging (filmmakersdiary.blogspot.com).  “People are hungry to learn about film-making from someone on the inside.”

Imminently practical, he gravitated toward editing for another reason: he is not a morning person.  Production crew and staff are on the set at 6 AM. Editors don’t have to arrive until 10! There is also another benefit. Unlike the other professions in Hollywood (directors, cinematographers, even writers) where men significantly outnumber women, about 50 percent of film editors are women. Immersion in such a gender-inclusive field, where many of his bosses were female, has helped Michael to conclude that general audiences crave more diversity of characters and plots in the movies.

Michael knows he was fortunate to arrive in the field when he did, before the digital age. As an assistant, he was in the room with the directors, anticipating what segment of film would be requested.  He learned why a particular director would choose a close up, move scene 86 to 37, or prefer an over-the-shoulder shot. “Now, with digital, you just hit a button.” Editors no longer require an assistant to be in the room, when editing.

What juicy tidbits can Michael tell us about the past 30 years of his stellar career? Apparently, he got spoiled editing for the Coen brothers on “Raising Arizona.”  They are “witty, funny, easy to work with. They keep rewriting until they get it right.” Woody Allen, on “Manhattan” and “Stardust Memories,” was also easy to work with. “He had a life outside the editing room. We were there from 9 to 6, not 16-hour days, like on some sets.”

Whoopi Goldberg, whom he met at the table read in “Boys on the Side,” is “kind, gentle, sweet.” After the “read through,” Whoopi moved the entire cast and crew to tears, when she explained that the movie (in which Whoopi’s character falls in love with and is devastated when Mary Louise Parker’s character succumbs to AIDS) was so important to her because her father also died of AIDS.

Michael highly recommends viewing “Dog Day Afternoon,” one of his favorite films (that he did not work on), to study the editing and production design. “Dog Day is a stage play. One set. Yet, it’s truly a cinematic experience. Let yourself feel the ebb and flow and pacing; it becomes musical.”

In his own work, he has learned not to “cut on motion, but on emotion.” He tries to cut to what you’d view in the theatre, to show a character’s reaction. If it is done correctly, he says, “it should be emotionally riveting.”  Judging by his body of work, he’s clearly mastered the technique.

Laura Weinstock Esq. owns Weinstock Scripts (weinstockscripts.com; weinstockscripts.blogspot.com). She is a screenwriter, script consultant and script doctor with an international clientele in film and television.  She is also an immigration lawyer specializing in asylum.